Demographic, clinical, and forensic data were gathered in an archival study of 82 female stalkers from the United States, Canada, and Australia. Female stalkers were predominantly single, heterosexual, educated individuals in their mid 30s who had pursued their victims for more than a year. Major mental disorder and personality disorder were suggested, especially borderline personality disorder. They usually threatened violence, and if they did threaten, were more likely to be violent. Frequency of interpersonal violence was 25 percent, but there was limited use of weapons, and injuries were minor. Stalking victims were most likely to be slightly older male acquaintances; but if the victim was a prior sexual intimate of the female stalker, her risk of being violent toward him exceeded 50 percent. Unlike male stalkers who often pursue their victims to restore intimacy, these female stalkers often pursued their victims to establish intimacy. Common emotions and motivations included anger, obsessional thoughts, rage at abandonment, loneliness, dependency, jealousy, and perceived betrayal. Results are interpreted from a clinical and risk management perspective.
J Am Acad Psychiatry Law 31:211–19, 2003

Female criminality is rarely studied and little understood. Although the crime of stalking is receiving a growing amount of research attention,1 the 15 to 20 percent of stalkers who are women are usually subsumed by the larger proportion of male stalkers in all research designs.(2–6) Gender differences among stalkers have been studied only once,(7) in an Australian community forensic mental health clinic. Purcell et al.(7) found that male stalkers in that study outnumbered females by a ratio of four to one. Similarities were more frequent than differences in most demographic, clinical, and forensic variables. The females were significantly less likely to have a history of criminal offenses, violent criminal offenses, or substance abuse diagnoses. They were significantly less likely than men to stalk a stranger, but more likely to pursue a prior professional contact, motivated by “a desire to establish a close and loving intimacy with the victim” (Ref. 7, p 2058). The threat and assault rates showed no significant differences, but females were less likely to threaten and then assault. Although the frequency of assault was somewhat higher for the males (36.7%), one of five female stalkers (22.5%) attacked the object of pursuit.
The crime of stalking, typically defined as “the willful, malicious, and repeated following and harassing of another person that threatens his or her safety” (Ref. 2, p 258), is increasingly recognized as a serious social and criminal problem, affecting large proportions of the populations in which it has been studied. Lifetime risks of being the victim of stalking have been measured in the United States, Australia, and Great Britain, and range from 8 to 15 percent for women and 2 to 4 percent for men.(8) If there is one stalker for each victim, then a large random telephone survey of stalking victims in the United States published in 1997 would indicate that 179,135 women had stalked another person in the previous 12 months.(9)

The purpose of this study was to assemble a sample of cases of stalking by females and study their various demographic, clinical, and forensic characteristics. Given the relatively small number of women charged with or convicted of stalking in any one jurisdiction, we attempted to gather cases from as many different collaborators in as many different geographical locations as possible, to increase the external validity of our findings.

Methods
The study design was an archival survey of mental health and law enforcement professionals. A static group comparison was used to test certain hypotheses within the sample. Research collaborators who were professionals with expertise and experience in stalking cases were sought from the United States, Canada, and Australia between June 2000 and March 2001. These professionals were known to the first author, in some cases through their research publications. Stalking cases were included based on the following selection criterion: an adult female (18 or more years of age) who had engaged in stalking behavior as defined by the California Penal Code: “. . .any person who willfully, maliciously, and repeatedly follows or harasses another person and who makes a credible threat with the intent to place that person in reasonable fear for his or her safety, or the safety of his or her family.”(10) Specific charges or convictions were not necessary for inclusion, but the behavior had to have occurred on more than one occasion.
The survey instrument was developed by the authors based primarily on published research studying male perpetrators. It consisted of 140 categorical questions distributed across 11 sections: (1) perpetrator demographics; (2) psychiatric and psychological information; (3) use of drugs or alcohol; (4) criminal history; (5) patterns of pursuit; (6) emotions and motivations for stalking; (7) threats; (8) violence; (9) escalation; (10) victim characteristics; and (11) victim response. The survey instrument is available from the authors. Because of the archival nature of the study, the subject’s consent was unnecessary. Subjects were not identified by name. Data were analyzed on computer with SPSS 9.0 for Windows. Frequencies and percentages were calculated based on the sufficiency of the data to determine the presence or absence of each variable. Inferential hypotheses were tested using chi-square analysis. Statistical significance was set at .05.

Results
Thirty-nine individuals responded to requests for participation as our research collaborators. Thirtythree (84.6%) completed and returned the survey instrument: 20 mental health professionals, 8 law enforcement professionals, 1 private security professional, 3 stalking victims, and 1 relative of a stalking victim. Data used to complete the research instrument were gathered from the case files of the research collaborators. Eighty-two cases of stalking by females were entered into our database from the United States (n=62), Canada (n=10), and Australia (n= 10). 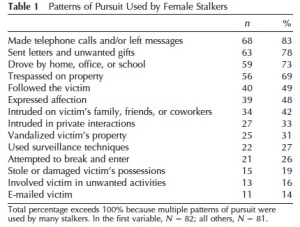 Use of Drugs or Alcohol
Three-fourths of the women (n= 49) denied a substance abuse history. One-third of the women, however, reportedly used the following substances while they were stalking, in descending order of frequency: alcohol (n= 17), cannabis (n= 10), amphetamines (n= 4), opiates (n= 1), and sedativehypnotic drugs (n= 1). There was no reported use of cocaine, hallucinogens, phencyclidine (PCP), or steroids.

Criminal History
Twenty-eight (37%) of the female stalkers had an adult criminal history prior to stalking, but only three (7%) had an available juvenile history of crime. Sixteen percent (n= 13) had one to four prior arrests for stalking other individuals.

Patterns of Pursuit
The female stalkers were most often prior acquaintances of the victim (n= 40, 50%). Twenty-seven percent (n= 22) were prior sexual intimates of the victim, 21 percent (n= 17) were strangers, and 2 percent (n= 2) were family members. Various means were used to pursue their victims in these contexts and are listed in Table 1. Multiple approaches were used by most of the stalkers. Slightly less than half of the subjects (n= 40, 49%) actually followed their victims.

Emotions and Motivations
Table 2 presents the emotions and motivations for the female stalkers, as reported by the research collaborators from police reports, victims’ reports, witness testimony, psychotherapists’ reports, and selfreports. The categories were derived from the extant research. More than one emotion or motivation was reported in most cases.

Threats
A threat was defined as a “written or oral communication that implicitly or explicitly states a wish or intent to damage, injure, or kill the target” (Ref. 11, p 90). Sixty-five percent (n= 50) of the female stalkers threatened their victims. Forty-one women threatened orally, 23 wrote threats, and 34 threatened multiple times. Nineteen women made homicidal threats.
Threats were divided into two categories: expressive and instrumental.(11) Expressive threats are primarily used to regulate affect in the threatener and are often inferred through the ventilation of anger or frustration (an example from our study: “I’ll wreck his business!!!”). Instrumental threats are used to control or influence the behavior of the victim through an aversive outcome (an example from our study: “Don’t ever call me crazy. I don’t want to hurt you like I did the others”). Forty women made expressive threats, and 42 made instrumental threats. Most women made both expressive and instrumental threats. The threats were followed by personal violence toward the victim in 15 (30%) cases, which is the true-positive rate. The false-positive rate would therefore be 70 percent. There was, however, a falsenegative rate of 15 percent (n= 3), which refers to the female stalkers who became personally violent who did not communicate a threat beforehand. There was no significant relationship between prior sexual intimacy and the presence of a threat (X2 [1, n = 77] = 1.16, p = .281).

Escalation
The female stalkers had contact with their victims daily (n= 37, 52%), weekly (n= 24, 34%), or monthly (n= 10, 14%). The duration of stalking lasted less than 1 year in 23 (32%) cases ; from 1 to 5 years in 38 (54%) cases; from 6 to 10 years in 9 (13%) cases; and more than a decade in 1 case. Escalation was defined by an increase in frequency of contact during the course of stalking (n= 51, 66%) and an increase in intrusiveness (n= 55, 73%). For example, the number of letters sent would increase over a set period of time (frequency), or letter writing as a method of pursuit would be supplanted by physical following (intrusiveness). Although the stalking activity of the majority of female stalkers escalated according to our definition, we did not measure the magnitude of the intrusiveness or the rate of increase in frequency.

Victims’ Characteristics
The victims of the female stalkers were mostly males (n= 52, 67%). Ninety percent (n= 72) were white, five percent (n= 4) were Hispanic, two percent (n= 2) were African American, and one percent (n= 1) was Asian. Their ages ranged from 16 to 68 years (mean, 41.30; SD, 11.08). Ninety-four percent (n= 74) were heterosexual. Forty-six percent (n= 36) were married, 17 percent (n= 13) were divorced, and 27 percent (n= 22) were single. Half of the victims had no dependents (n= 43, 52%). Victims’ Response to Stalking Eleven of the victims (six females and five males) had been stalked in the past, usually by a stranger (n= 7). Only two were stalked previously by a prior sexual intimate and three by an acquaintance. Onethird of the victims initiated contact with the female stalkers after the stalking began (n= 22), which subsequently increased the stalking behavior in 68 percent of these cases (n= 15). It reportedly decreased stalking behavior in one case and had no effect in six cases. A complete list of victims’ responses is listed in Table 4.
Ninety-seven percent of the victims were reportedly aware that they were ultimately responsible for their own personal safety, and 90 percent reported positive treatment by law enforcement.